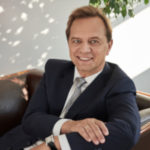 Attorney-at-law, Managing Partner. Robert Jędrzejczyk is a lawyer recommended by Legal 500 EMEA in the field of Energy, Natural Resources and Labour law as well as by Chambers Europe in the field of Energy and natural resources, mergers and acquisitions, corporate law and environmental protection law. A graduate of the Jagiellonian University Faculty of Law and Administration and the Institute of Public Administration in Paris he has been an attorney-at-law since 1996. In the years 1994-2014 he had been with the law firm Gide Loyrette Nouel known in Poland as Tokarczuk, Jędrzejczyk and Partners GLN Sp.k., since 1999 as a regional partner and since 2004 as an international partner. Throughout his long career he has gained experience also as a lecturer in the Department of Administrative and Economic law at the University of Warsaw. As a member of numerous boards of directors of capital companies he supervises the legal aspects of activity of many entities. Robert Jędrzejczyk specialises in advising in the field of mergers and acquisitions, privatisation, commercial law, energy law, infrastructure projects, negotiation of social packages and collective labour agreements.

Robert Jędrzejczyk is fluent in Polish, French and English.